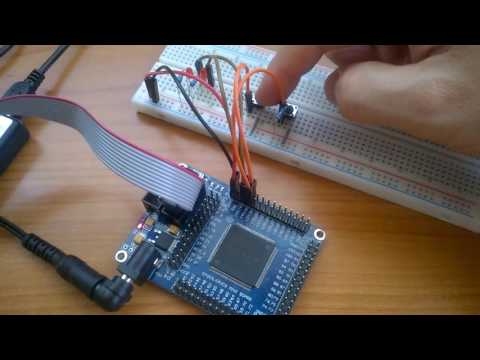 Hello, I’ve been trying to decide on a FPGA development board, and have only been able to find posts and Reddit threads from 4-5 years ago. So I wanted to start a new thread and ask about the best “mid-range” FGPA development board in 2018. (Price range $100-$300.)
I started with this Quora answer about FPGA boards, from 2013. The Altera DE1 sounded good. Then I looked through the Terasic DE boards.
Then I found this Reddit thread from 2014, asking about the DE1-SoC vs the Cyclone V GX Starter Kit: https://www.reddit.com/FPGA/comments/1xsk6w/cyclone_v_gx_starter_kit_vs_de1soc_board/‬ (I was also leaning towards the DE1-SoC.)
Anyway, I thought I better ask here, because there are probably some new things to be aware of in 2018.
I’m completely new to FPGAs and VHDL, but I have experience with electronics/microcontrollers/programming. My goal is to start with some basic soft-core processors. I want to get some C / Rust programs compiling and running on my own CPU designs. I also want to play around with different instruction sets, and maybe start experimenting with asynchronous circuits (e.g. clock-less CPUs)
Also I don’t know if this is possible, but I’d like to experiment with ternary computing, or work with analog signals instead of purely digital logic. EDIT: I just realized that you would call those FPAAs, i.e. “analog” instead of “gate”. Would be cool if there was a dev board that also had an FPAA, but no problem if not.
EDIT 2: I also realized why "analog signals on an FPGA" doesn't make any sense, because of how LUTs work. They emulate boolean logic with a lookup table, and the table can only store 0s and 1s. So there's no way to emulate a transistor in an intermediate state. I'll just have play around with some transistors on a breadboard.
UPDATE: I've put together a table with some of the best options:

icoBoard ($100). (Buy it here.)
The icoBoard plugs into a Raspberry Pi, so it's similar to having a SoC. The iCE40-HX8K chip comes with 7,680 LUTs (logic elements.) This means that after you learn the basics and create some simple circuits, you'll also have enough logic elements to run the VexRiscv soft-core CPU (the lightweight Murax SoC.)
The icoBoard also supports a huge range of pluggable pmod accessories:
You can pick whatever peripherals you're interested in, and buy some more in the future.
Every FPGA vendor keeps their bitstream format secret. (Here's a Hacker News discussion about it.) The iCE40-HX8K bitstream has been fully reverse engineered by Project IceStorm, and there is an open-source set of tools that can compile Verilog to iCE40 bitstream.
This means that you have the freedom to do some crazy experiments, like:
You don't really have the same freedom to explore these things with Xilinx or Altera FPGAs. (Especially asynchronous circuits.)

numato Mimas A7 ($149).
An excellent development board with a Xilinx Artix 7 FPGA, so you can play with a bigger / faster FPGA and run a full RISC-V soft-core with all the options enabled, and a much higher clock speed. (The iCE40 FPGAs are a bit slow and small.)


Note: I've changed my mind several times as I learned new things. Here's some of my previous thoughts.

What did I buy?

I ordered a iCE40-HX8K Breakout Board to try out the IceStorm open source tooling. (I would have ordered an icoBoard if I had found it earlier.) I also bought a numato Mimas A7 so that I could experiment with the Artix 7 FPGA and Xilinx software (Vivado Design Suite.)

What can I do with an FPGA? / How many LUTs do I need?

Hi all, I am obviously new here, but have good reputation elsewhere I am quite happy to jump through any hoops that give you additional peace of mind :)
If you live near Margate, UK you are welcome to pick up in person or I will ship (even internationally) as long as you cover the shipping costs.
Got lots of stuff I don't want, the prices I'm listing are just rough guidelines, If you can find any of my stuff cheaper elsewhere I will certainly lower my price. I pretty much did a rough price guestimate using eBay listings. Things with (boxed) mean that I have the original box for them. Some stuff I havn't priced up, just make sensible offers :)
I will accept pretty much any payment method if possible, Paypal, Bitcoin, BACS Transfer, etc. Just ask! :)
Without further ado, things:
£350 - Saphire AMD 6990

£40 - 4 x Corsair CX600 Builder series 600W power supplies (boxed) 1
£20 - 6 x AMD Sempron 140 2.7ghz processors (Maybe dual core unlockable) (boxed) 1
£5 - 3 x Kingston ValueRAM 2GB DDR3 1066Mhz memory (boxed) 1
£30 - 6 x Asus M4N68T-M LE V2 motherboards (boxed) 1
£140 - 1 x Iiyama E2607WSV 1920x1200 26" Monitors 2
£50 - Antec CP-850 850W power supply (requires CPX form factor case)3
£50 - Altera DE0 (Cyclone 3) FPGA (Brand new unused but open box)4
£35 - O2 Joggler hackable tablet thingy, powered by an Intel atom and most Linux distros have been ported. (boxed)5
NZXT Sentry LXE Touch screen fan controller 6
Asus P5VD1-X motherboard 7
Pentium 4 3ghz (I think, this hasn't seen the light of day in a while :p) 7
2 x 1GB DDR 400Mhz Adata memory 7
If you are curious about where all this stuff has been / come from, here's some history on everything :)
1) All of this stuff was purchased for bitcoin mining back in May 2011. It's all been faithfully mining in my spare bedroom since then, has turned a nice little profit, and is now a bit too slow to compete with all the other miners, so it's gotta go! photo 1 photo 2
2) These used to be the monitors I used on my main desktop. I decided to upgrade to 2560x1440 monitors, so these are now sitting in the spare bedroom not doing much. They were always great monitors though! photo
3) Used to be the power supply in my main PC, however when I upgraded to a new motherboard I could no longer fit my SLi setup in since the PSU was right up against the bottom of the board and I needed to utilise the bottom slot. Remember that this is the new CPX form factor by Antec, so you'll either need an Antec case or a hacksaw to get it to fit ;)
4) Bought this for bitcoin experimentation but never ended up using it. It got took out of the box and I looked at it, that was about it. Never been used and in the original box with all the things.
5) These are great fun especially for the price, I bought it and used it as a bedside clock for a while (Yay Ubuntu+Conky). I use my Nexus 7 to do this job now though, so this has been relegated to the cupboard. Has a green stuck pixel right on the edge of the screen. You can find lots of info about hacking them here
6) Used to use this as my fan controller but switched to a couple of BitFenix recons because I fan control in software. Looks really cool though. Shame I can't have this and software control really! :P
7) Used to be my old gaming PC, got relegated to being the home theatre PC and then got relegated to the cupboard :P, Hasn't been used in a while but I assume it all still works, will test it before I send it off.
That's all, again feel free to ask me any questions. or negotiate on the prices (especially if your ordering more than one thing). I'm on IRC (Freenode) should you want to IM me. :)

Hello my fellow shibes, sit back for a sad story :(
So a year or so ago I played around with bitcoin mining for a few weeks. I've got an assortment of Altera development boards, so naturally I tried mining BTC on them. They did pretty okay -- I'm getting 120Mhash/sec on the Altera SOCkit (Cyclone 5) using basically someone's open-source project ported to this device, with no optimization. I had also written an optimized core for a smaller device and doubled its performance, so it stands to reason that I could probably get around to 200Mhash with some careful coding on this board. Pretty reasonable; competitive with lower-end graphics cards at significantly lower power dissipation. Of course, by the time I was doing this, commercial ASIC miners were just coming on the scene and blow FPGAs out of the water! I mined a few mBTC, then moved on to other things and forgot about cryptocurrencies for a while.
Along comes Dogecoin (woof!)!
Fire up my laptop with GT620M graphics and get 25kHash. Decide to look at an FPGA implementation again (starting with an open source project here ). Port it to the Cyc5, flash it, and get... 1.5kHash. Not good. Now, there's room for ~4 cores, so that's 6kHash theoretical with the unoptimized core. I started thinking of potential optimizations, and even started writing a new core, but paused and did some calculations and the results aren't good. It really is a memory-bound algorithm! The FPGA only has enough memory for 4 full scratchpad blocks (or 8 half, etc.), meaning that folding more than 4 processing cores into a pipeline is more than a waste. A 4-deep salsa pipeline has really long path lengths, making for a low max clock rate... but a longer pipeline (with a correspondingly faster clock rate) has more wasted cycles. We can do partial scratchpads and regenerate the missing data to keep the pipeline more full, but this has diminishing returns, some quick calculations it's asymptotic to about 2x improvement (and this is theoretical; adding more complexity overall tends to slow the core down).
The thing is, modern GPUs are running 256-512bit memory interfaces, at 2-4GHz, to 2-4GB memory. That memory bandwidth and size is just something an FPGA cannot reach, at least not at a competitive price point. Even the high-end Altera FPGAs don't have more than a handful of MB of RAM.
Moreover, it's hard to even get enough I/O pins to implement a 512-bit memory interface on an FPGA, and it certainly won't be running at 4GHz!
So, TL;DR: GPUs win this round! A custom FPGA board with a very wide external memory might be competitive, and an ASIC could be competitive (but would basically be a GPU). No FPGA for this shibe :(

Using a Raspberry Pi with an FPGA development board for a first foray into Bitcoin mining. With a performance of only 0.2 million hashes per second (MH/s) a Raspberry Pi alone is a non-starter for Bitcoin mining. However, the low cost and low energy consumption computer makes the perfect platform for coordinating mining across more capable ... FPGA Bitcoin Mining. At the foundation of block creation and mining is the calculation of this digital signature. Different cryptocurrencies use different approaches to generate the signature. For the most popular cryptocurrency, Bitcoin, the signature is calculated using a cryptographic hashing function. For those unfamiliar with cryptographic hashes, hashes calculate a fixed-length unique ... "I bought a cheap board with Altera Cyclone II from ebay" Not a great way to start a question about something that does not work.... What did you program, and what did you expect to see? What do you think is causing the LEDS to blink at the moment? – Oldfart Nov 16 '18 at 11:09. I think that the LEDs are blinking because the original program is still in the FPGA, but maybe I am not right ... If nothing happens, download GitHub Desktop and try again ... Open Source FPGA Bitcoin Miner. From Bitcoin Wiki. Jump to: navigation, search. A miner that makes use of a compatible FPGA Board. The miner works either in a mining pool or solo. This is the first open source FPGA Bitcoin miner. It was released on May 20, 2011. Contents. 1 Software needed; 2 Compiling. 2.1 Altera; 2.2 Changing the clock speed; 3 Programming the FPGA. 3.1 Altera; 3.2 Using ...